The COVID-19 pandemic may have abruptly cut off the finish to his sophomore season at Georgia Southern, but former Delano standout Calvin Wishart has stayed deeply focused on the game of basketball. His quarantine in Statesboro, GA has not been filled with video games and Netflix. Instead, game films from teams across the country have stolen the screen on his flatscreen television. 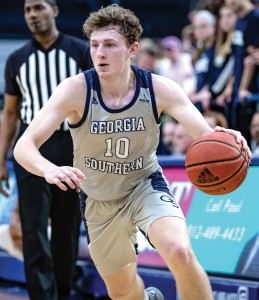 Wishart is busy studying potential suitors for his services as a Division 1 junior guard next season after he officially put his name in the transfer portal Monday, announcing so on his Twitter account.
“I’ve been talking nonstop yesterday and today to, like, 20 schools,” Wishart said over the phone Tuesday afternoon. “I’ve been watching film on schools. It’s literally been nonstop — hang up and you missed a call.”
Wishart made his decision following the departure of head coach Mark Byington, who recruited Wishart out of Delano. Byington accepted the coaching job at James Madison. His assistants are also leaving Georgia Southern.
“I came here for a lot of reasons. One of the main reasons was the coaching staff and how much trust they had in me coming out of high school. Now, that is gone,” Wishart explained. ”You go to a school for a reason and that reason was taken away.”
Byington’s departure was not only hard on Wishart.
Just two days after Wishart announced his decision, his former teammate Quan Jackson became the second Eagle to enter the transfer portal following the departure of Byington.
The transfer portal allows players, like Wishart, to keep their options open to find a better spot, just as coaches do. It’s like recruiting and being recruited all over again.
“With the new coach, with whom I have no relationships with, instead of one option with him, I can still come back to the school or pursue other options” Wishart explained.
In recruiting college players out of the transfer portal, coaches have a better idea about what they are getting.
“It’s more intense. It is a lot more in a shorter period of time,” Wishart explained. “Now that you’ve played college basketball, they can see your college film. It’s not as big of a gamble to some of these coaches.”
As mentioned, Georgia Southern is still in the mix. Although Wishart has not spoken with him in person (only on the phone), new coach Brian Burg is recruiting Wishart. Others Wishart named from his list are Minnesota, South Dakota, South Dakota State, North Dakota, Northern Illinois, Texas Tech, Santa Clara and George Washington.
Wishart knows what he wants.
“I want to play a lot of minutes. If I would stay at Georgia Southern, I would play 30-plus minutes,” he said. “I want to play a lot of minutes on a good team that can win a conference and go to the tournament.”
Wishart mentioned the constant support he has received from his friends back in Delano during his two years at Georgia Southern. That, too, is important in his decision, which he hopes to make in the next several weeks.

Wishart certainly helped put Delano on the map when it comes to high school basketball in the state of Minnesota.

Delano basketball fans remember Wishart for his four unprecedented seasons with the Tigers after he transferred from Buffalo following his 8th-grade school year. That tenure, of course, ended with Wishart being the program’s all-time leading scorer and the Tigers raising the Class 3A State Championship trophy at Target Center after a Cinderella run as the No. 6 seed for the tournament.
Wishart, Jackson and Georgia Southern were preparing to play in the Sun Belt Conference Tournament semifinals against top-seed Little Rock when the NCAA ended the remainder of the season due to the Coronavirus.
In what may have been his final game in an Eagles uniform, Wishart scored 10 points and  four rebounds March 11 in a 81-62 win over Georgia State in the Sun Belt quarterfinals.
Wishart started 23 games this season, and averaged 9.4 points and 27.7 minutes per game. His top scoring game of the season was 21 points Nov. 8 in Georgia Southern’s 109-55 win over Reinhardt.
Wishart started 16 games for the Eagles his freshman season, and appeared in 30 games. He averaged 5.2 points.