Authorities said Two McLeod County deputies are hurt and a standoff was ongoing Monday afternoon into the evening in Winsted.

Officials from several departments awere currently in the 600 block of Pheasant Run in Winsted.

Herald Journal was on the scene but authorities have only provided limited details thus far.

It’s not clear what the arrest warrant was for, but Langenfeld said he was told it was for “bountiful warrants,” including related to child pornography but he isn’t positive. Authorities also believe multiple firearms are involved.

In the 5′o clock hour, aerial video showed a robot and drone being used on the property. The robot apparently was used to open the front screen door of the residence. Around 5:45 p.m., SWAT team members approached the home behind a shield and were able to get inside.

According to authorities a man was found dead inside the house.

The Minnesota State Patrol, the Minnesota DNR and officials with the Bureau of Alcohol, Tobacco, Firearms and Explosives (ATF), along with Winsted Police Department, are on the scene. 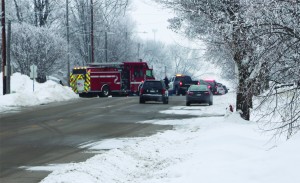 No comments Posted in News, Winsted