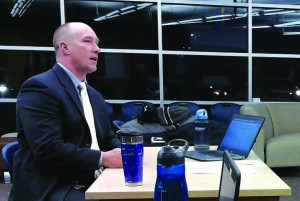 “I put out a survey to Minnesota principals last year asking about their val/sal status – of the responses, about 50 percent of them no longer recognize val/sal,” HLWW High School Principal Jason Mix noted after the Jan. 11 school board meeting. “Some that do not recognize val/sal are Maple lake, Annandale, Big Lake,  Osakis, Milaca, LeSueur-Henderson, Canby, Browerville, Edina, and there are others.”

“Approximately 50 percent of schools in Minnesota no longer use valedictorian and salutatorian status; they’ve gotten away from it because it promotes competition,” High School Principal Jason Mix said at the Jan. 11 school board meeting, referring to schools he surveyed on the topic.

Wade Moravec, a high school math teacher at HLWW, commented that this system would give students more freedom to choose rigorous courses, instead of being tempted to go for an “easy A.”

“I personally feel that changing the system a little bit helps foster growth,” he said.

Board Member Michelle Heuer agreed, noting that students may opt out of a difficult advanced placement course due to concern for their class rank.

With the proposed change, “everyone who qualifies is recognized,” Heuer said. “Everybody who does the work should get the credit.”

“It seems like we’ve lost respect for history and tradition, and we’re going to change everything,” he said, adding that, years ago, schools used to grade on a bell-shaped curve. “I’m not saying that’s the way we should grade, but I think we should look at it.”

Bush also noted that students should not strive for a high GPA in order to win an award.

“I just think we’re going overboard in the recognition,” he said. “. . . I don’t know that we need to be hanging these carrots out all the time.”

Mix said he was puzzled by Bush’s response, because at previous meetings, Bush advocated for students to be recognized for having part-time jobs.

“I really thought this was right up your alley,” Mix said. “I’m flabbergasted that you’re so completely against it.”

Bush answered that he is not completely against it, but he is concerned about the use of antidepressants in youth, and “the kind of pressure we’re putting on kids today.”

“I see that we’re reducing that pressure,” Board Chair Jamie Wiech commented.

Bush commented that he is worried the school is contributing to an “entitled culture.”

Mix noted that last year, four graduating seniors at HLWW had GPAs of 3.9 or higher, but only two of them were recognized as valedictorian and salutatorian. Students with GPAs of 3.5 or higher currently graduate with honors at HLWW, so the new system would not be changing the number of students honored, he said. Instead, it would change how the students are recognized.

“We’re here to develop talent,” Mix said. “We want students to have ability to try new things, expand their minds, and work hard.”

Look for the rest of the story in the Monday, Jan. 18 edition of the Herald Journal. Click here to subscribe online or in print.