Posted on September 21, 2022 by Andrew Meuleners

According to the Watertown Fire Department, crews were called to a fire that was reported to be near a lumber yard on the south side of Watertown shortly before 4 a.m.

When firefighters arrived, they found flames had engulfed the rear warehouse.

Watertown Fire Chief Tom Hanson says the building, which was determined to be Arrow Building Center, is considered to be a complete loss.

Chief Hanson adds no one was reported injured.

Multiple fire departments were called in to help extinguish the flames, including Delano, Mayer, Montrose and St. Bonifacius 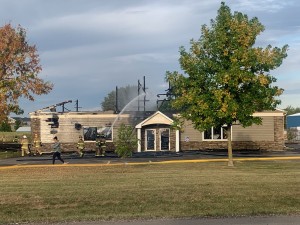 Comments Off Posted in News, Watertown