MIDDLEVILLE TOWNSHIP – A  Peterbilt semi-truck rear-ended a pickup on Hwy. 12 between Howard Lake and Cokato Wednesday morning, according to the Minnesota State Patrol (MSP), in a crash that eventually involved two additional vehicles, and closed Hwy. 12 until at least Wednesday evening.

The Peterbilt semi-truck with a tanker was traveling eastbound on Hwy. 12 when it rear-ended a Ford pickup truck hauling a gravity box near 58th St. at approximately 8:31 a.m. The gravity box flew into the westbound lanes, striking a Mack cement truck that was traveling westbound. The Peterbilt semi truck then attempted to avoid the gravity box, but then rear-ended the Volvo sedan, causing the Peterbilt semi-truck to roll over and block all lanes of Hwy 12, according to MSP.
The 2007 Peterbilt semi-truck was driven by Jonathan Noel Hinnenkamp, 46, of Sauk Centre. He was wearing a seat belt, and received non-life-threatening injuries.
A 1995 Ford pick-up was driven by Larry Everrett Smith, 60, of Howard Lake.  Ryan Everrett Smith, 30, of Howard Lake, was a passenger in the vehicle. Both Smiths were wearing seat belts, and received non-life-threatening injuries.
The 2006 Mack semi-truck was driven by Steven Edwin Rossman, 64, of South Haven.  Rossman, who was wearing a seat belt, was transported to the Buffalo hospital with non-life threatening injuries.
The 2006 Volvo S40 was driven by Alex Timothy Sheff, 24, of Dassel.  Sheff was wearing a seat belt, and received non-life-threatening injuries.
The Minnesota State Patrol (MSP) was assisted at the accident scene by the Wright County Sheriffs Office, Howard Lake Ambulance, Cokato Ambulance, and Howard Lake Fire.
MnDOT estimated Hwy. 12 would remain closed in both directions until at least Wednesday evening. MnDOT suggested drivers should seek alternate routes, follow law enforcement directions, and plan for delays. Crews have been called to remove spill materials overnight, according to MnDOT. 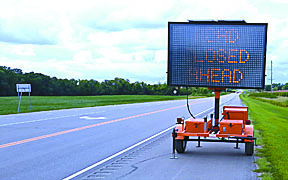