MAYER – Sometimes a moment happens that could only be created by sports.  A moment that far surpasses anything that could be planned or scripted.  That was the case Thursday night in the Mayer Lutheran High School gymnasium.

Senior Emilee Gustin came into the game against the Sibley East Wolverines just three points shy of 1,000 for her career. Three points is nothing for Gustin, who just happens to be the school’s all-time leader in 3-pointers made.

As the game started, it was clear the Crusaders, and their fans, knew what might happen in the game. As each shot attempt from Gustin went up, a groan came from the crowd as it rolled out.

“I was really, really nervous,” Emilee said who became just the third girl in school history to reach 1,000 points. “I felt like there was a lot of pressure, but I knew that I just wanted to get the win, even if I didn’t get it. We still just had to play hard and put that aside till I actually got it.”

Finally, on her sixth attempt of the game, Gustin found the bottom of the net for her 1,000th career point, and the emotions set in.

“It was really nice,” Emilee  said. “Just, like, the disbelief. It was crazy and I can’t believe this actually happening. All my hard work is finally paying off. It’s just nice to have this kind of community that’s supporting me this whole time.”

Kris Gustin has been the coach for his daughter Emilee since fifth grade. Emile scored her 1,000th career point Thursday, Feb. 9, becoming just third girl in school history to reach that milestone.

As the ball went through the hoop and fell to the floor, Gustin was swarmed by her teammates and the game was stopped. After several hugs from teammates, Gustin walked over to the bench to share a special moment that couldn’t have been scripted any better.

“Crazy,” Emilee said about how it all worked out. “It worked out really well. That was really nice.”

On parents night, of all nights, Gustin reach the 1,000 career points milestone, a goal she’s been working towards her entire career. And who happened to be her coach? None other than her father, Kris.

Emilee and Kris shared an emotional hug before Kris presented his daughter with the commemorative ball, as both enjoyed the moment as a player and coach. As a father and daughter.

“I would say, probably a dad thing,” Kris said about being a dad and coach. “Obviously, it’s special for both as a coach and as a dad. We got a couple of other girls that are close to 1,000 points, as well. They’re all like daughters to me. So really, coach and dad are both proud of all the work she’s put in.”

To be able to share that moment with her father and her coach, is something Emilee will never forget.

“Oh yeah,” Emilee said about cherishing this moment. “Forever. Me and my dad have a really close bond because of the sport. So that is one thing that I’ll never forget.”

It was a moment that couldn’t have worked out any better even if it was planned. Sports. They just sometimes create moments that are beyond our wildest hopes or expectations.

“We didn’t really plan it that way,” Kris said about the moment. “In fact, I said to her last night, are you kind of surprised that it came this early because obviously, it was a goal that she set for herself.  As we looked at the season and how it laid out, we thought it would be a little bit closer to the end of the season, and maybe even in playoffs. She’s had a good season, and she’s been there for us, so obviously, on parents night makes it even more special.”

It’s been an incredible journey for the Gustins that’s spanned over eight years now as coach and player.

“It’s actually been eight years because I was her coach in fifth through eighth grade,” Kris said. “She kind of kids me that she doesn’t want to go to college. She wants to go back to fifth grade and play for me for eight more years. It’s certainly been a joy.” 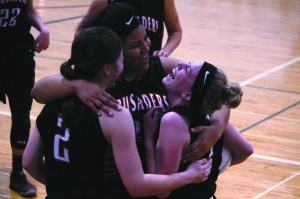 Emilee Gustin is all smiles as she gets congratulated with hugs from teammates Sophie Flucas and Kate Strehlke.

When Emille came into high school, Kris was dealing with a tough decision of whether to continue to be his daughter’s coach, or to step aside and enjoy the next few years. There’s no doubt Kris made the right choice.

“As she was coming in to be a freshman, I wondered, is this the time to step away and just enjoy it,” Kris said. “And then somebody told me, ‘you know, not many people get an opportunity to coach their kid at the high school level, so why wouldn’t you.’ That was pretty good advice, and it certainly worked out well for us.”

As the regular season nears its end and the section playoffs loom on the horizon, Kris and Emilee are just enjoying being able to be together, and making the most of the time they have left as player and coach.

Whatever ends up happening for the Gustins and the Mayer Lutheran girls basketball team this season, Emilee and Kris’ relationship as player and coach will ultimately come to an end. What won’t ever come to an end, is the memory of this moment. A moment they shared as father and daughter. A moment that goes far beyond the game of basketball.

Comments Off Posted in HJ Sports