Delano Municipal Baseball Park is looking fresh this spring after some major upgrades and renovations, done in preparation for the 2019 amateur baseball tournament that runs Aug. 16 to Sept. 2.

The ball park will get a workout this weekend, when the Delano varsity baseball team hosts the Dick Traen Memorial Wood Bat Tournament. Games began Thursday and will run through  Saturday afternoon.

Also, the Delano A’s have 12 regular-season home games scheduled at Municipal Baseball Park. They hosted Dassel-Cokato this past Wednesday, and have three home games this coming week. The A’s host Hutchinson Sunday, Howard Lake Wednesday and Cokato Sunday, May 26.

New LED lights. The new lights are much brighter, significantly more cost efficient to use, and far easier to maintain. They also have a feature on each tower called “uplighting”, which lights up the underside of the ball on popups or fly balls. There is no wait time when turning the lights on as they instantly turn on and off.

Grandstand roof extension. Our old roof only covered about 40% of the grandstand, while the extension covers the entire seating area and front walkway. Additionally, the backstop was raised from 18 feet to 32 feet, which will keep more foul balls inside the park, which has several safety benefits. The new roof extension by Bauer Design & Build blends the old and new roof seamlessly and newcomers to the ballpark may think the roof extension has always been there! There is new, upgraded netting on the backstop that is similar to what is used at Target Field. It was more expensive upfront, but is made to last more than twice as long as our previous net, not to mention providing a noticeable improvement for the viewing experience of fans. Also, our grandstand walkways were widened to provide improved fan flow and better ADA accessibility. 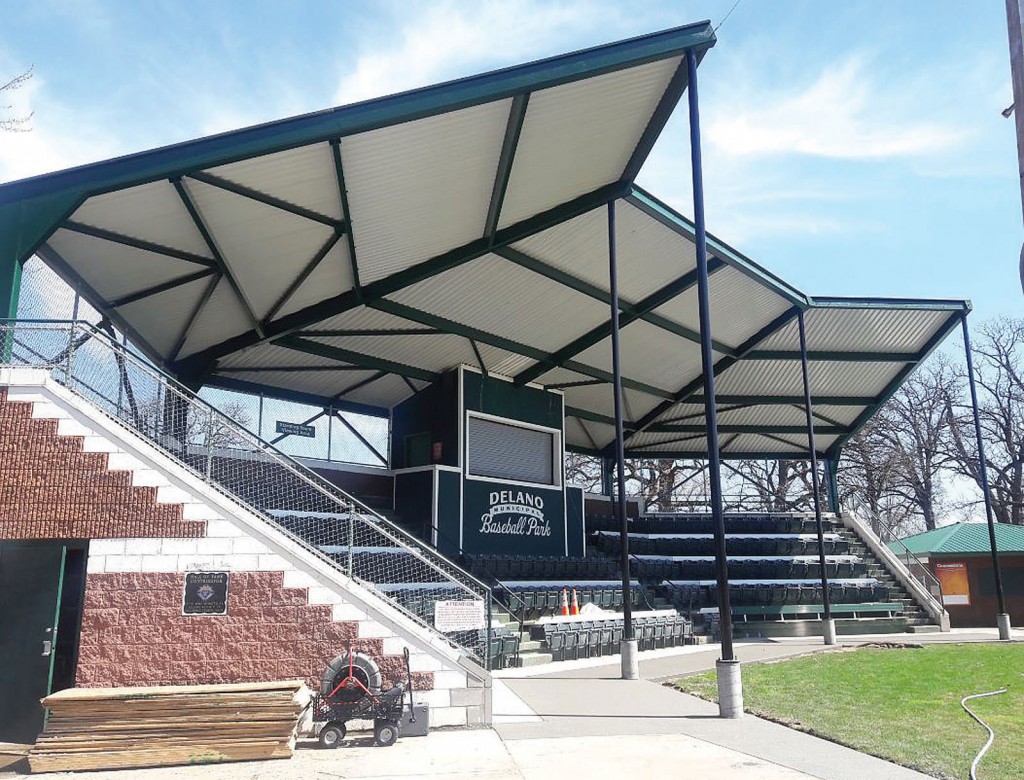 Finally, led by expert local carpenter John Otto and problem solver Chris Arens, a group of volunteers constructed a new 134 foot long knee wall behind home plate to attach the netting to. After looking at multiple options (many quite expensive), we ended up going with Trex composite wood. We were fortunate to receive generous donations from Lowe’s of Plymouth, Trex, Fasten Master, and Nick Feely Construction to make this project much more affordable. The knee wall will be maintenance free and looks great too! We’re still working on permanently attaching the netting and on other finishing touches for the knee wall. We also have some field repair to do, along with reseeding and overseeding, but considering all the work done, the field survived quite well!

A big thank-you to the City of Delano for working with the Delano Athletic Club, a nonprofit community organization, to provide these upgrades! These are big ticket improvements and couldn’t have been done without the support  and financial contribution from the City of Delano! Part of the agreement is that the majority of the revenue earned at the 2019 State Town Team Tournament will be turned over to the City to help pay for these projects. A “win win” proposition in our eyes! Now let’s play ball!