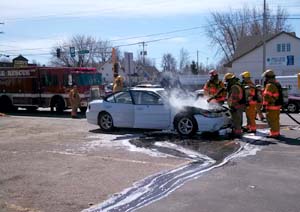 COKATO, MN – A car fire at Nate’s PC in Cokato Saturday a little after 11 a.m. received a lot of attention from those in town for the garage sales. Nate Lantto, the owner of Nate’s PC, located on the northwest corner of US Highway 12 and Broadway Avenue, had arrived at work in his Pontiac Grand Prix about 45 minutes to an hour before the incident, he said. Suddenly he saw a man park his truck in the middle of Hwy. 12, and Lantto was going to tell the man he could not park there. However, the man was simply stopping to let Lantto know his car was on fire in the parking lot. Due to the wind, the smoke emanating from the car remained low to the ground, preventing Lantto from seeing it inside the building, he said. “It seems I was the last to know,” Lantto added, noting there were several people across Hwy. 12 taking pictures and videos. Employees at Holt Motors were also moving vehicles away from the smoldering car when Lantto went outside. The Cokato Fire Department arrived and extinguished the fire, which is believed to be electrical in nature, according to Cokato Fire Chief Jeff Carlson. The car was a total loss. “I’m glad nobody was hurt, and none of Holt’s vehicles were damaged,” Lantto said.

No comments Posted in General