New Dassel tower to be painted 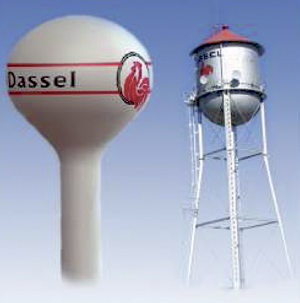 DASSEL, MN – The new Dassel water tower will be painted in the coming weeks, and should be fully online in mid-October, engineer Chuck DeWolf said.

The new tower will feature an off-white color called “cloud,” with the new rooster logo, black lettering for the word Dassel, and red ropes around it (as shown).
The new tower will be online by mid-October, once testing and checks are done. “It’s bacteria tested, just like water mains,” engineer Chuck DeWolf said.
The old tower will be taken down in sections with a big crane.

No comments Posted in General