Peterson appears in court to face charges from Dassel standoff

Aaron Peterson made his first appearance Friday in Meeker County District Court. The criminal complaint against him indicated felony charges of second-degree assault and threats of violence, a gross misdemeanor drug possession charge, and nine gross misdemeanor counts of unlawful possession of a firearm.

During the standoff, officers at different times reported hearing sounds they suspected were gunshots, according to the criminal complaint.

Peterson’s next court date is slated for Monday, Aug. 26.

On August 1, 2022 at approximately 5:30 p.m., the Meeker County Sheriff’s Office received a report of a male individual identified as Aaron Peterson, 31, of rural Dassel, who had threatened to shoot some family members. Peterson also made threats to harm law enforcement if they responded. Peterson was reportedly going to go from his residence in the 17300 block of 745th Avenue to the relative’s home nearby. The information from the investigation indicated Peterson may be in possession of firearms. Peterson is prohibited from possessing firearms from an incident that occurred in November of 2020. Deputies responded and attempted to contact Peterson. A search warrant was obtained and the Kandiyohi Meeker SWAT Team also responded to the scene at approximately 9:15 p.m. A perimeter was established and repeated attempts to talk Peterson out of the home failed. Chemical irritant was projected in to the house but that also failed to get Peterson to cooperate and exit the house. SWAT Teams from McLeod County, Hutchinson Police, Wright County and Willmar Police were called to assist and relieve the initial SWAT Team. Attempts to negotiate and bring this situation to a peaceful end continued throughout the day August 2. An arrest warrant for Felony Terroristic Threats was obtained Aug. 2, as well. At approximately 9:45 p.m. August 2, Peterson exited the house and surrendered without further incident. No law enforcement nor Peterson were injured during this incident. The investigation regarding the threats is ongoing and additional charges may result from the investigation. Peterson is being held in the Meeker County Jail on the issued arrest warrant awaiting his first court appearance. Also assisting at the scene were Allina Ambulance, Dassel Fire Department, and Woodland Centers Mobile Crisis Response Team.

At this time the Meeker County Sheriff’s Office is involved with an extended standoff with a barricaded subject in the 17300 block of 745th Ave, south of the City of Dassel.  Meeker County Deputies and Kandi/Meeker SWAT initially responded during the evening hours of Aug. 1.  This was in response to the subject threatening to kill family members.  Contact was made with the subject, but he refused to comply and remained in the house.  A perimeter was set and negotiators have tried to make contact with the subject.  The Kandi/Meeker SWAT is being assisted by SWAT Teams from McLeod County, Hutchinson Police, and Wright County.  No further information is available at this time as this is an active scene.

Accounts of a man barricading himself in a home in Dassel have been received by the Enterprise Dispatch.

MN Crime Watchers reported that Meeker and Renville county sheriff’s departments were on the scene with negotiators.

The group also reported that a Bear Cat and Humvee extricated the man, and neighbors were evacuated.

An eyewitness took the photo below, and reported there were 50 to 60 vehicles on scene including helicopters, BCA, drones, and armored vehicles. The incident reportedly started yesterday at 5 p.m. yesterday.

Additional details will be posted as they become available. 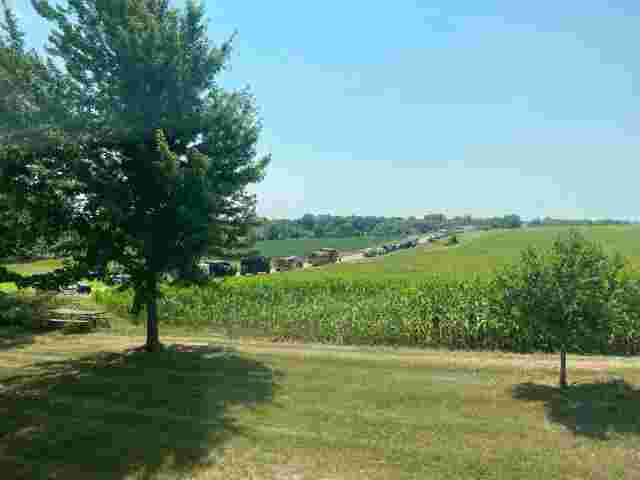