An end-over-end rollover crash Saturday morning in Meeker County sent a Dassel man to the hospital with life-threatening injuries according to the Minnesota State Patrol (MSP).

Austin Lee Hammerstad, 26, was thrown from his vehicle when it rolled at Minnesota Highway 24 and Meeker County Road 17 near Forest City.

According to a report from MSP,  Hammerstad’s 1999 Saturn sedan was traveling north on Highway 24. At County Road 17, the car ran off the left side of the road and rolled end over end several times.

Hammerstad was ejected from the car onto County Road 17. The vehicle landed on its roof blocking the county road.

According to the State Patrol report, Hammerstad was not wearing a seat belt.

Following a meeting with the Minnesota Department of Health this morning, the administration of Dassel-Cokato Schools announced the intention to start school on time, in-person this fall. 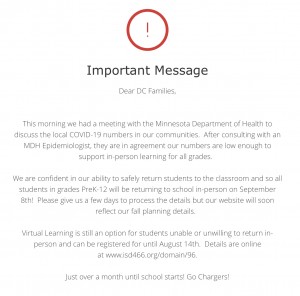 PHOTO GALLERY – The Dassel History Museum is currently featuring a replica Tiffany lamp exhibit, showcasing art created by local craftspeople.  The exhibit is easily accessible by taking the elevator to the museum’s fourth floor.  The exhibit runs through Saturday, October 20, and is free.  Click the link below, or see the September 14 issue of the Enterprise Dispatch for more.

DASSEL-COKATO:  The Dassel-Cokato School Board will meet in closed session at 5 p.m. Monday, Sept. 10.  The only major item on the meeting’s agenda is a “superintendent review.”  The meeting takes place at a typically scheduled date and time, and the review of the district superintendent is an annual part of the school board’s typical process.

MEEKER COUNTY – According to the Minnesota State Patrol, a crash between a semi and an automobile occurred at 8:49 a.m. this morning at the intersection of Highways 12 and 15, near Dassel.

Duane Lyle Mattson, 57, of Dassel, was the driver of the 2001 STLG STE tandem semi.  He was taken to the Hutchinson hospital with non-life threatening injuries.  Mattson had been wearing his seatbelt at the time of the crash.

Rudolph Dwight Nyquist, 84, of Cokato, was the driver of the 2001 GMC Sierra involved in the crash.

The passenger in the Sierra was Mary Ann Nyquist, 82, also of Cokato. The Nyquists were transported to the hospital in Hutchinson with non-life threatening injuries.  Both individuals had been wearing seatbelts at the time of the crash.

The theme of the show was “Vases & Vessels; Bouquets and Botanicals.”  Both horticultural specimens and arrangements were judged.

Click the link below to see the beautiful arrangements, and other sights from the show:

Watch for more information in the Friday, Aug. 3 edition of Enterprise Dispatch.