DC One-Act moves on to sections

Posted on February 1, 2016 by Kristen Miller 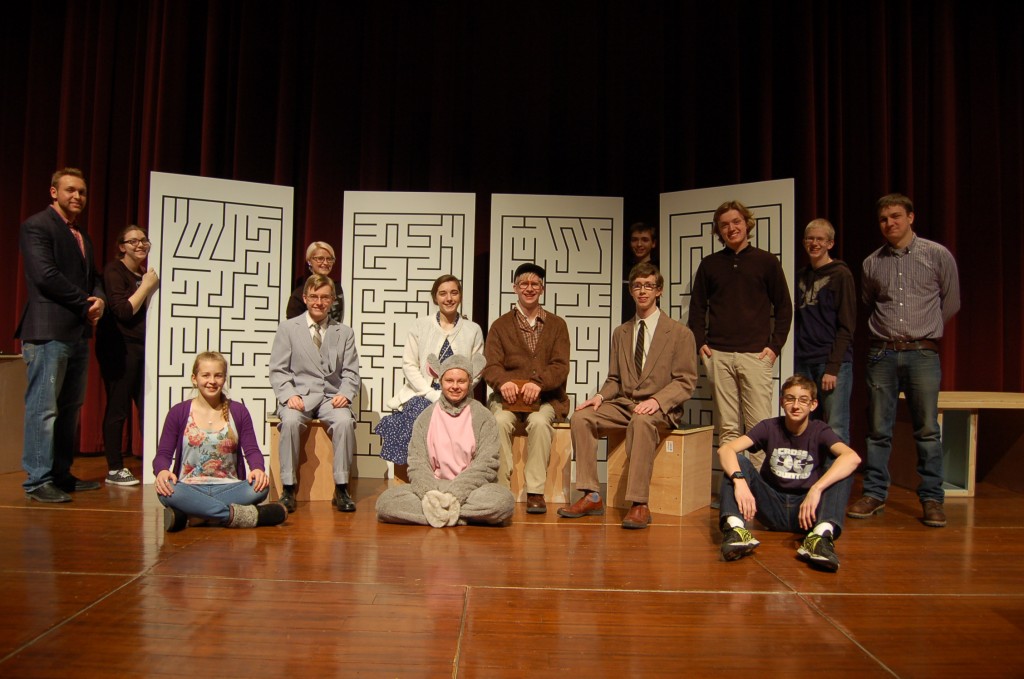 Jan. 30 and will advance to section finals at Delano High School Saturday, Feb. 6. There will be free public performance 7 p.m. Thursday, Feb. 4 at the Dassel-Cokato Performing Arts Center.

The cast of the Dassel-Cokato One-Act play “Flowers for Algernon” centers on Charlie Gordon, a mentally challenged 32-year-old man, who is chosen by a team of scientists to undergo an experimental surgery designed to boost his intelligence. Charlie is played by Dassel-Cokato Senior Isaac Olson, who is no stranger to this type of character having performed a similar character with Buddy Layman, in the crowd-pleasing community theatre play “The Diviners” when he was just a freshman.

Alice Kinnian, played by Natalie Dahlin, is Charlie’s teacher at a state institution for the mentally challenged and recommends Charlie for the experiment because of his eagerness to learn.

The directors of the experiment, Dr. Strauss, played by Ethan Langemo, and Professor Nemur, played by Henry Von Ohlen, asks Charlie to keep a journal. The entire narrative of Flowers for Algernon is composed of the “progress reports” that Charlie writes, explained the one-act play’s director James Frickstad.

This is Frickstad’s first time directing a one-act play. He chose this production because he saw it performed once before. Though, in his opinion he found it to be substandard, he could see the potential in it.

Instead, he put his own creative twist to it by making it more abstract by adding maze walls and even a test mouse (not a live one).

He also had to cut quite a bit in order for it to be within the one-act timeframe of 35 minutes or less.  One of the cuts had to be a part of the ending, which included the flowers in the play’s namesake.

For Olson, playing Charlie has been very interesting, but difficult at the same time. “It’s difficult to show the progression of the character as far as his mental stability,” Olson said, noting that he is portraying it with both his voice and body movements.

Throughout the rehearsal process, Frickstad has been impressed with his students and how well they take direction. “I can say with100-percent confidence we have quite the mature and professional group of kids here,” he said. “I’m excited to see what they can do at competition.”

Posted on December 7, 2015 by Kristen Miller

FRENCH LAKE TWP, MN – Nine teenagers were injured in a single-vehicle rollover in French Lake Township Sunday evening, seven of which were riding in the truck bed, according to the Wright County Sheriff’s Office. Blayne Kovisto, 16 of Dassel, was driving a 1998 Chevy S10 pickup involved in the rollover Aug. 23 at approximately 10:05 p.m. at the intersection of County Road 35 NW and Peyton Ave NW in French Lake Township. Kovisto was transported via Life Link Air Care to Hennepin County Medical Center.

Nels Wuollet,  16 of Dassel, was riding in the front seat and was transported to Buffalo Hospital and then transferred to North Memorial Hospital. Riding in the truck bed were Ryan Raisanen, 17 of Greenfield, Kyle Laho,  16 of Corcoran; Clayton Johnson, 15 of Dassel; Niklas Lee, 15 of Greenfield; Payton Halonen, 15 of Monticello; Chad Hoikka – age 15 of Cokato; and Garrett Keplinger, 15 also from Cokato – all were transported to Buffalo Hospital with the exception of Raisanen, who was transported to St. Cloud Hospital.

As of Monday afternoon, Hoikka, Lee, Keplinger, and Halonen were reported as being released. No information on the condition of the others involved was available as of Monday afternoon. The accident is under investigation by the Wright County Sheriff’s Office.

Snap Fitness in Cokato now has new owners and a new location.
Christina and Jason Clark purchased the Snap Fitness earlier this month from Kirk Asplin and Richie Hasti.
The fitness center moved seamlessly from its Highway 12 location to a new 7,000-square-foot facility in Cokato Mall, 201 Broadway Avenue South in downtown Cokato (next to Keaveny Drug), and opened March 23 to members.
“For almost nine years, we have focused on health and wellness in the surrounding communities,” said Christina Clark, who, along with her husband, own 10 locations,  including Howard Lake and Dassel.
“We are happy to bring our level of quality and service, that our customers have come to expect, to Cokato to help give you the results you are looking for,” Clark commented.
Snap Fitness Cokato will be regularly staffed Mondays through Thursdays 9 a.m. to 1 p.m. and 3:30 to 7 p.m.; Fridays 9 a.m. to 1 p.m.; and Saturdays 8 a.m. to noon.
A grand re-opening event will take place Monday through Saturday, March 30 through April 4, with an open house Friday, April 3 from 9 a.m. to 5 p.m. and Saturday, April 4 from 9 a.m. to noon.

Faculty Follies are back at DC Schools

The staff of Dassel-Cokato Schools will present Faculty Follies, a variety show to raise money for local student scholarships.

The show will feature music, comedy, skits and a variety of other performances all set  around the theme “The Tonight Show with Jakey Failin!”  In a spin-off of The Tonight Show, teachers, staff members and administrators will all be showing their stuff on stage.

There will be two shows this year that will be held at the Dassel-Cokato Performing Arts Center on Saturday, April 18 at 2 and 7 p.m.

Tickets are $5 and may be purchased in advance at the high school activities office, Red Rooster Foods in Dassel and the Marketplace in Cokato from Wednesday, April 1 to Friday, April 17.  All seats are general admission, and any tickets remaining will be available at the door.

No comments Posted in Schools

The annual meeting of the Cokato Community Chest will take place Tuesday, April 7 at 7 p.m. at Cokato City Hall.
At that time, the board of directors will disperse the funds from the 2014 fall drive to a number of charities on the local, state, and national level.
With questions, call Butch Paulson at (320) 286-5029 or Margaret Salo at (320) 286-5827.