Delano PeeWee A to play at state

The Delano PeeWee A hockey team plays in the state tournament in Monticello, beginning Friday, March 13.

The Tigers open against Sartell at 6 p.m. 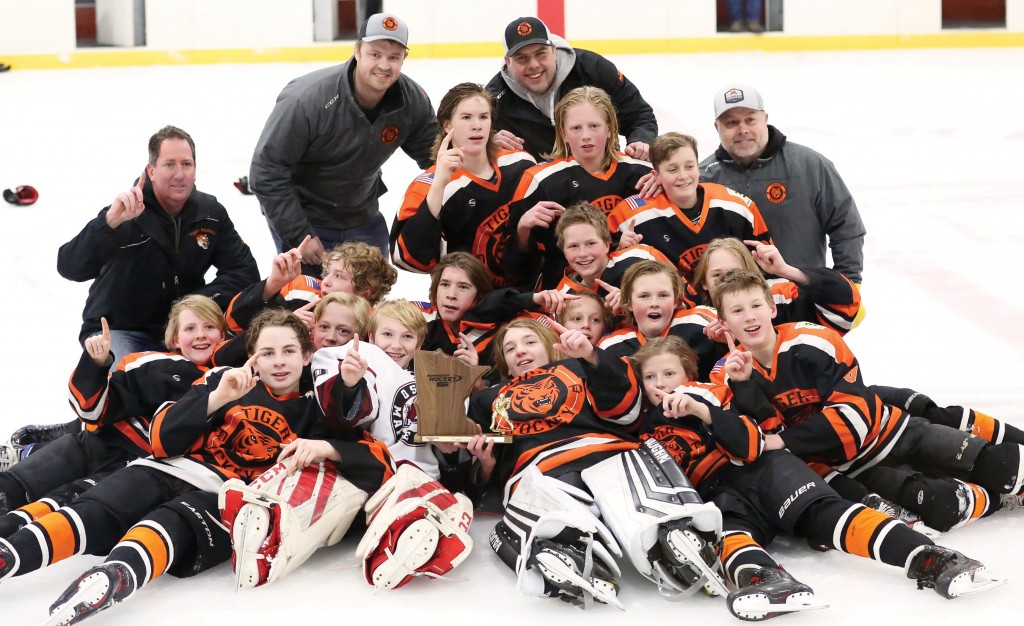 The Tigers qualified for state by winning the regional championship March 1 in Anoka. 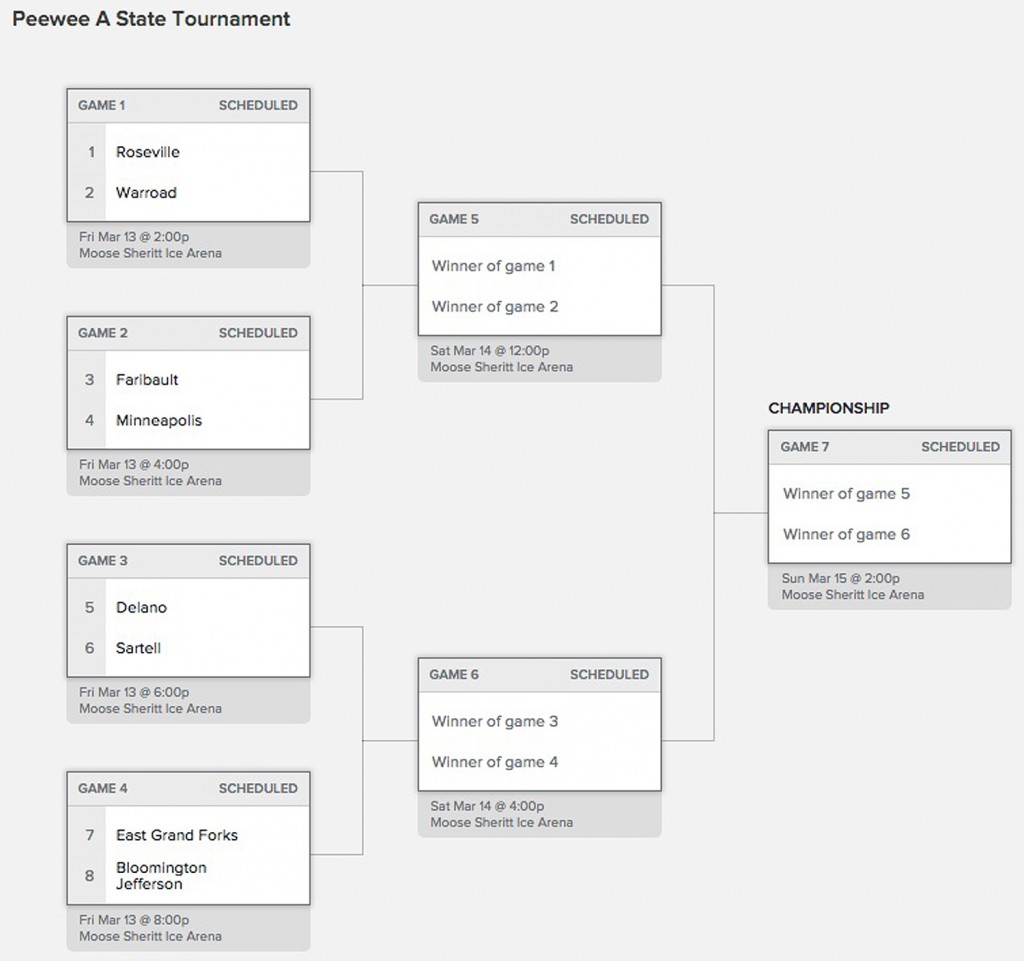 Black’s fourth-place finish in the 100-yard backstroke was the top finish for a DWM swimmer on championship day. Black’s time was 53.39 seconds.

Breck/Blake’s Charlie Crosby won backstroke with the time of 48.51 seconds.

Black, Gentry Nuytten, Joe Coyle and Kaden Georges combined for the eighth-place finish in the medley relay. Their time was 1:42.85.

Kern, Anderson, Georges and Will Merten finished 10th overall in the 200 freestyle relay. Their consolation heat time was 1:30.90.

Nuytten swam in the consolation heat of the 200 individual medley. His time Saturday was 2:04.77. That placed him 13th overall.

STATE WRESTLING: Tschudi and Hajas both medal at state

Delano’s Carson Tschudi finished his junior season as the fourth-place wrestler at 145 pounds in the Class AA State Tournament Saturday at the Xcel Energy Center.

Tschudi lost his opening-round match Friday, but battled back with a wrestleback win later that day and two more Saturday to put himself in the third-place match.

He faced Princeton’s Zach Wells (45-1) in that third-place match. Wells edged Tschudi for a 6-4 decision and took third place.

Earlier Saturday, Tschudi (31-6) picked up his second win in the wrestleback bracket, edging Orono’s Jacob Schmid (39-17) 5-4. Tschudi’s won his next wrestleback match by an injury forfeit. That win put him in the third-place match.

After winning his two matches Friday, Hajas (41-5) was defeated by Simley’s Bennett Tabor (50-0) 4-2 in the semifinals Saturday.

In his first wrestleback match, Hajas was pinned by STA’s Garrison Solliday at 3:55 of the match. Hajas took the fifth-place medal via an injury forfeit by Becker’s Brayden Weber.

Weber was involved in a scary episode shortly after his semifinal match, which ended not long after Hajas and Tabor wrapped up their match.

After being pinned by Orono’s Danny Striggow, Weber collapsed to the mat. Instantly, medical professionals responded, performing CPR on the high school junior.

Weber regained consciousness and was stretchered out of the arena. The crowd gave a standing ovations as Weber gave a thumbs-up.

In a battle of previously unbeaten wrestlers, Tabor went on to win the state title over Orono’s Striggow (18-1). Tabor won an 8-1 decision.

BOYS HOCKEY: Delano to meet Mahtomedi in first round

DELANO — Delano will meet a familiar state tournament foe Wednesday night in the quarterfinals of the Class A State Hockey Tournament. The No. 5 seeded Tigers play No. 4 Mahtomedi at 8 p.m. at the Xcel Energy Center.

The Tigers (22-6) and Zephyrs (20-8) met back in the 2017 tournament in the consolation championship game. Delano won that game 8-1 at Mariucci Arena.

The Zephyrs were the final team to qualify for this year’s state tournament. They defeated South St. Paul 5-1 Friday night to win Section 4. 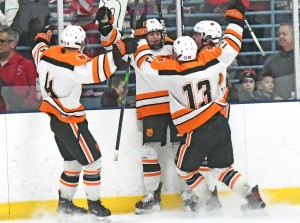 Delano reached the state tournament with a 3-2 double-overtime win over Armstrong/Cooper Thursday night in Section 2.

Both teams are returning to state.

Delano lost to Greenway 6-4 in the opening round of the 2019 tournament, but rebounded to take the consolation championship. The Tigers defeated New Ulm 2-1 and North Branch 2-1 in the consolation bracket.

Mahtomedi took third place last year with a 7-3 win over East Grand Forks in the third-place game. In the championship bracket, the Zephyrs topped New Ulm 6-0 in the quarterfinals before losing 3-2 in overtime to Greenway.

The Delano/Mahtomedi game will cap Wednesday’s action, which includes four Class A games.

St. Paul — Delano 220-pound senior Edward Hajas put himself in the championship semifinals of the Class AA State Wrestling Tournament with a pair of wins Friday at the Xcel Energy Center.

Hajas is the only Delano wrestler out of four who is still alive in the championship bracket.

In the semifinals Saturday, Hajas will face Simley’s Bennett Tabor, who is undefeated at 48-0.

Carson Tschudi’s third state tournament did not start the way he wanted it to. The Tiger junior lost 5-3 in a sudden victory to PLPR’s Connor Tulenchik in the first round Friday morning.

Because Tulenchik (46-4) won his quarterfinal match, Tschudi was granted a wrestleback match.

The win put Tschudi in the second round of wrestlebacks. He will take on Orono’s Jacob Schmid (39-6) Saturday.

In the 285-pound weight class, Hajas’ sparring partner and classmate, Matt Baker, opened his first state tournament with a pin fall of MFC’s Brody Ash at 3:36 of their opening-round match. The undersized Baker (33-8) was unable to fend off Plainview-Elgin-Millville’s Logan Wingert (40-2) in the semifinals. Wingert pinned Baker at 2:27.

Wingert finished second at state a season ago.

Baker saw a familiar face staring at him in that wrestleback match, as he took on Orono’s Shea Albrecht (25-10), a Wright County Conference East foe.

Albrecht was bumped to the consolation bracket when he was pinned by Wingert (4:00) in the first round.

After a scoreless first periods, Baker took a 1-0 lead with an escape and scored two more on a takedown for 3-0 lead in the second period. But, in the same sequence that got him that two points, Albrecht reversed Baker and put the Tiger on his back.

Albrecht recorded the pin fall, on what was the Orono Spartans’ mat, at 2:56, ending Baker’s state tournament and his career in a Delano singlet.

The one match proved to be the end for Kroells, as he did not receive a wrestleback match.

Radunz lost his quarterfinal match, and took that wrestleback spot.

MINNEAPOLIS — Two Delano/Watertown-Mayer (DWM) individuals and one relay team will swim in the finals heats of the Class A Swimming and Diving Championships Saturday at the UofM Aquatic Center.

Junior Colby Kern will be in the finals swim for the 200-yard freestyle and 100 freestyle. Sophomore Nick Black will swim in the 100 backstroke.

Kern and Black are also part of the Tigers’ 400 freestyle relay team that squeaked into the final eight.

Black will swim in the finals heat of the 100 backstroke. He finished third in the prelims with the time of 52.93 seconds.

Breck/Blake’s Charlie Crosby, who beat Black to the wall for the section championship a week ago, holds the top time of 47.65 seconds heading into the finals. That is an all-American time.

Black swam the 100 freestyle at the prelims but did not advance on to Saturday’s meet. He finished 18th with the time of 49.49 seconds.

Black and Kern swam the final two legs for DWM’s finals-qualifying 400 team. Kaden Georges and Gentry Nuytten preceded them. The foursome finished eighth at the with the time of 3:18.34.

Black, Nuytten Joe Coyle and Georges took ninth place in the 200 medley relay at the start of the meet. Their time was 1:41.68. They will swim in the consolation heat Saturday.

DWM’s 200 freestyle relay also finished ninth Friday. Kern, Per Anderson, Georges and Will Merten combined for the time of 1:30.39.