The playoff hoops season is here once again and Herald Journal has you covered for all area teams. Bookmark this page to stay connected with updated brackets, scores, and news from area section basketball tournaments provided by Herald Journal Sports Editor Kip Kovar

To see all the brackets for area teams in one spot, click here. Brackets will be updated each day to keep fans up to date.

SPONSORED CONTENT - We are less than 30 days from the Winstock ’22 early-bird deadline!

VIP, Reserved Seating, and campgrounds A, B, C, and D are all SOLD OUT, but you can still get best-available camping and tickets HERE so you don’t miss a moment of the fun. Winstock 2021 was a sell-out, and based on ticket sales thus far, organizers are expecting 2022 could sell-out, as well.

“It is very important for people this year to get their tickets as soon as possible, especially if they already have their campsites secured,” said Winstock Country Music Festival Chairman Dave Danielson. “This early-bird deadline is a big date for ticket sales, and we anticipate we could sell out again this year.”

Complete lineup announced/Rumble on the Road schedule
In case you missed it, organizers also announced the final four acts to complete the Winstock ’22 lineup. Casi Joy, Stephen Paul, The Jensen Sisters, and Jake Nelson will all be performing Winstock weekend. Get to know them and all the Winstock ’22 artists HERE.

“These artists compliment the rest of the lineup wonderfully and we are excited for how things are shaping up for Winstock this year,” Danielson said.

Organizers are also finalizing this year’s Rumble on the Road stops, with dates and locations to be announced soon. 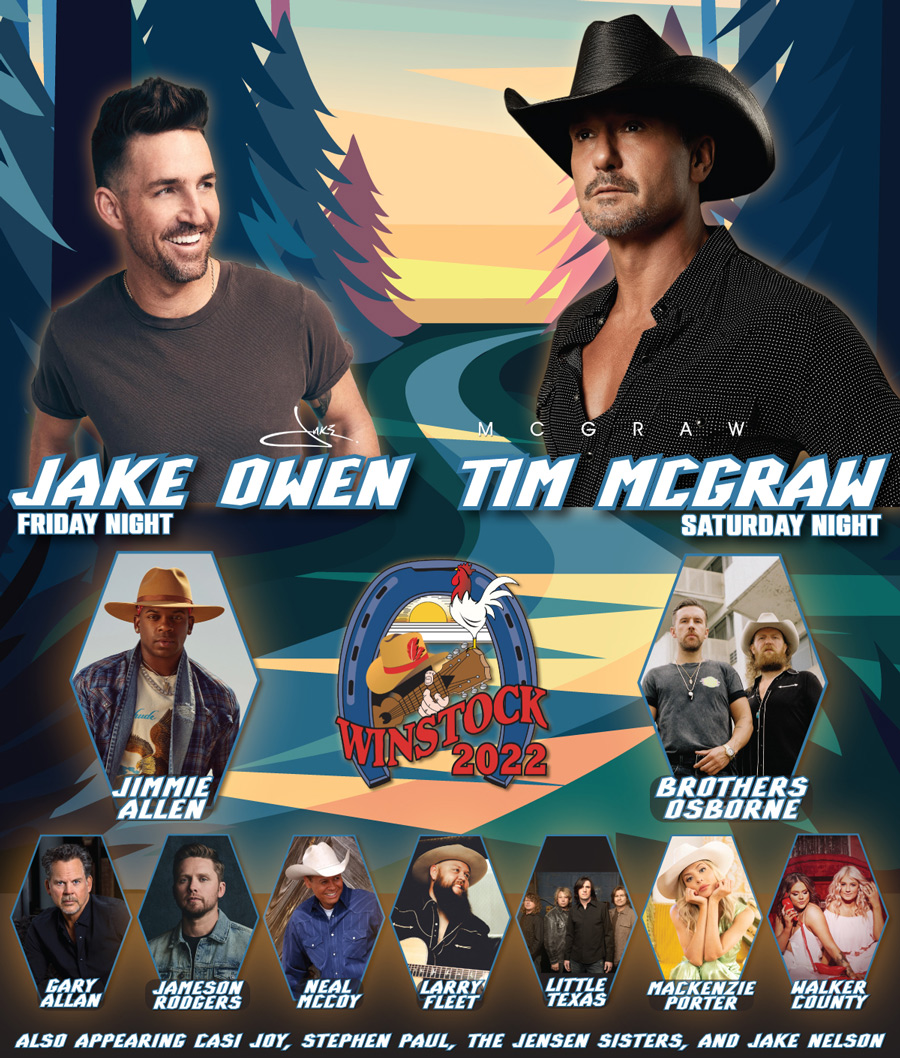 SPONSORED POST – Winstock Country Music Festival will be back in June in 2022 and organizers cannot wait to celebrate with you! Set your alarms for the morning of Wednesday, Nov. 17 when the complete Winstock ’22 artist lineup will be unveiled on K102. Tickets will also go on sale at that time.

VIP tickets sold out at this year’s event for next year. A very limited number of reserved seats will go on sale, as will the best selection of camping sites, so plan now to get your tickets and camping passes secured early for next year’s event.

“Based on this year’s sell out, and the record number of orders placed at this year’s event for next year, we are well on our way to another potential sellout,” said Winstock Country Music Festival Chairman Dave Danielson. “We are excited to share our lineup for our 28th festival and hope everyone tunes in on the morning of Nov. 17 and gets their tickets early.”

The prep football and volleyball postseason will officially get underway next week. The first round of football playoffs begins Tuesday, Oct. 26 while some volleyball sections will start play as soon as Monday, Oct. 25. The following is a look at the section seedeing for all area teams along with the brackets.

SECTION 2A VOLLEYBALL – Section 2A Bracket

SECTION 2A FOOTBALL – Section 2A Bracket

To stay updated on the postseason for all area teams, follow Sports Editor Kip Kovar on Twitter for scores, schedules, in-game updates and much more. @Kovar_HJSports

This isn’t the same soccer program fans saw a season ago. In just one short season, the Delano boys and girls soccer teams this year have taken huge steps forward and it’s all because of one simple reason.

“Being a team,” Delano girls soccer coach Pat Prindle said about the biggest change from a season ago. “Just being a team and the confidence that comes with it. There’s just no drama. This group is just playing and they’re working for something. They want to improve. It’s building things up. The seniors are leading and the younger girls are building up to.”

A season ago, the boys and girls soccer teams combined for just seven wins. This year, both teams have hit the double digit mark in wins as they’ve combined for 23 wins this year.

“The biggest thing is chemistry,” Delano boys coach Tristin Griffin said. “These guys want it. They want to play together. Next man up is their mentality. Last year, it wasn’t that way. It was all about me. They’re putting in the work. It’s all kudos to them.”

For the Delano boys, the goal was 12 wins this season. The Tigers have already hit that mark with their win over Big Lake to end the regular season.

“That was our goal going into this season,” Griffin said. “Then it’s just building success. Going into our section, which is tough, we want success going in and to be ready for that.”

It took the Tigers just three games this season to match their win total from a season ago. It took just four games to surpass it as they opened the season on a four-game winning streak.

“Honestly, just being bonded has been big for us as a team,” Nick Farniok said. “Last year ,we were kind of disconnected and didn’t really have any chemistry. This year, we get along way better and it’s good times. We’ve had lots of fun this year.”

Delano’s fourth win of the season came on the road against Princeton. Not only was it a win on the road, it was a memory for the guys to remember.

“After last year with just three wins and now we have 12 is awesome,” Griffin said. “To see the guys happy is what it’s about. All the guys said the bus ride home from Princeton was one of their best memories. That’s what you want. You want those memories.”

The season for both the boys and the girls have been very similar. Both teams got off to hot starts only to lose a key player to injury. The Delano boys team lost leading scorer Will Strandemo for a period of time while the girls team lost a leader and all-around great player in Sidney Schmit for the season with an injury. Despite that, the wins kept coming.

“It’s that next man up mentality,” Griffin said. “These guys trust each other. They know the next guy up is going to come in and make plays. The next guys up are making plays and we’re still winning.”

“It’s obviously a big loss to lose a player like Sidney,” Prindle added. “I think what it’s done is that it’s made the team adapt, develop, and find different ways to play. It’s made players mature. It’s become how do we make things happen.”

Both the Delano boys and girls teams enter the postseason not satisfied. They’ll look to not only continue to pick up wins, but also to make more memories along the way in their turnaround seasons.

ROGERS – Depth has been the key for the Delano girls tennis team this season. That’s been put to the test down the stretch this season but the Tigers have been up for the challenge.

With multiple lineup changes throughout the past few matches, one thing has remained constant for the Tigers – they’re winning matches.

With a 5-2 win over Buffalo Monday, Delano is headed to the Section 5AA championship where they’ll look to keep their impressive season rolling.

“All in all, the girls played well,” Delano coach Kim Finn said. “They were ready. They’re good players. They’re neighbors so we kind of know each other well. It was a nice win.”

Kaitlyn Pink set the tone for Delano at No. 3 singles with a dominant 6-0, 6-0 win. That kept her perfect record intact as she picked up the first win of the day for Delano.

“Both Audrey and Kaitlyn are true competitors,” Finn said. “With those two, I know I can put them anywhere and they are going to compete. That’s nice to have.”

CJ Stolfa and Sydney Trautman would add a win at No. 3 doubles to give Delano a 3-2 lead. That set up Addie Persian and Isabelle King to clinch the win for the Tigers with a 7-5, 6-2 win at No. 2 doubles sending Delano to the section championship match.

“It feels wonderful,” Finn said. “It’s been a while. It’s been a great season.”

“It feels really good,” Olivia Bekkala added. “Having it be my senior year and going this far is pretty exciting.”

Bekkala and teammate Katelyn Ring put the finishing touches on the win at No. 1 doubles for the Tigers. They won their match to complete the sweep of all three doubles matches for Delano.

Delano’s run to section championship match has been an impressive story. It’s taken an entire team willing to do whatever it takes. About a month before the postseason began, Finn decided to mix up the lineup and move Bekkala from No. 1 singles to No. 1 doubles.

“I love doubles too because it’s really fun,” Bekkala said about the switch. “I love playing with Katelyn. If it gets the team a point, that’s all that matters. I’m fine playing wherever.”

With Bekkala making the move to doubles, that forced the other singles players to step up as well. Bella Molitor has moved up to No. 1 singles, while Wittwer and Pink have stepped up their games as well.

“It’s paid off,” Finn said. “We had to make a change. I’m very proud of the way the girls have stood up. That’s what is nice about having a deep team. We have a deep team with a lot of equal abilities. You can put them anywhere and they’ll do the job.”

Changes to the lineup have been nothing new for the Tigers. Even as recently as last week, the changes kept coming but so have the wins.

“With all the stuff going on, it just shows with our team that we’re able to do it,” Bekkala said. “I think we’re just a really strong team.”

Delano will take on Maple Grove in the Section 5AA championship Thursday. Maple Grove knocked off No. 1 Wayzata 5-2 in their semifinal matchup. It will be the second time Delano and Maple Grove have faced off this season.

Delano beat Maple Grove 5-2 in their lone matchup earlier this season, but Finn knows how much things can change since that matchup.

“We’ll just see,” Finn said about the matchup. “It’s always game by game. I’ll prepare them differently this time than we did Buffalo. I know they’re thinking we already beat them but it’s a whole different ball game now.”