LESTER PRAIRIE, MN – Two young women from Lester Prairie were among 10 finalists for the title of Princess Kay of the Milky Way chosen from across the state.

Grace Jeurissen and Elizabeth Krienke represented McLeod County at the coronation, which took place Wednesday at the bandshell at the Minnesota State Fairgrounds.

Krienke, along with Brittney Tiede of Le Center, were selected as runners-up, while Amy Kyllo of Byron was crowned the 66th Princess Kay.

Jeurissen and Krienke were also named scholarship winners during the event.

See the story in the Aug. 23 issue of Herald Journal. 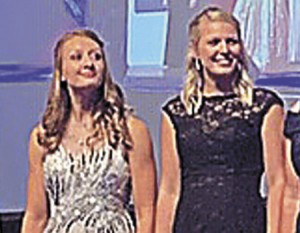 The referendum was for $13.65 million in facility improvements.

See more in the Friday, Aug. 16 edition of Herald Journal.

MAYER, MN – Mayer City Council during its Monday, Aug. 12 meeting, will conduct a public hearing regarding a United States Department of Agriculture loan for a new fire station. Other items on the agenda include a discussion regarding mosquito control; Watertown-Mayer School special election; parking lot bids for West Ridge Park; and a possible closed session to discuss labor negotiations strategy. The meeting will begin at 6:30 p.m. A work session meeting will follow the regular meeting.

Winsted Summer Fest is set for Friday and Saturday, Aug. 9 and 10

WINSTED, MN – Winsted Summer Festival, hosted by the Winsted Area Chamber of Commerce will feature two days loaded with events for the entire family. Most events will take place at Mill Reserve Park. Two popular features are the fireworks display over the lake, set for 9:30 p.m. Friday, and the grand parade, which will take place at 6:30 p.m. Saturday night. CLICK HERE for more details.

McLEOD COUNTY, MN – A pavement preservation project began today, July 29, on approximately 30 miles of McLeod County roads, according to a release from the McLeod County Highway Department. The project is a combination of seal coating and fog sealing. The project should take about five days. Asphalt Preservation Company of Detroit Lakes was awarded this year’s seal coat project. Value of the work is approximately $600,000. The locations are shown on the attached map. The roads will remain open. Flaggers will be present to help guide traffic; which should expect minor delays. Seal coating is a preventative maintenance activity that involves applying liquid emulsified asphalt to a blacktop surfaced road and covering with aggregate. This process extends the life of the roadway and helps hold off costly reconstruction. Fog sealing involves spraying the road with a thin layer of liquid emulsion (oil). Any questions regarding the project can be directed to Jessie Dehn, Assistant County Engineer at 320.484.4321 or Jessie.Dehn@co.mcleod.mn.us. Project specific information will also be posted on our Facebook and Twitter pages; username is “McLeodCoHwy”. For other County construction information, please visit the construction page on the county highway department’s website at www.co.mcleod.mn.us/highway/construction. 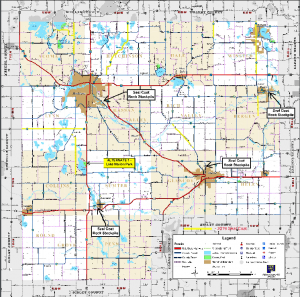 Highway 7 reduced to one lane July 18 near Lester Prairie

LESTER PRAIRIE, MN – Highway 7 near Lester Prairie will be reduced to one lane between Eagle Avenue and Dairy Avenue Thursday, July 18, according to a release from MnDOT.

The Minnesota Department of Transportation (MnDOT) will be paving the roadway and a flagging operation will direct traffic through the work zone. Motorists may encounter short delays.

MnDOT asks motorists to slow down and pay attention while driving through work zones. Remember, orange cones, no phones. Motorists who speed through a work zone or who disobey work zone flaggers face a $300 fine.