The 2022 Winsted Farmers Market season begins Wednesday, June 22 at Hainlin Park, featuring a variety of growers and makers. It will be open weekly, Wednesdays from 3 to 6 p.m., through September 28.

No comments Posted in Happenings, Winsted

Storytime at the Park Saturday, June 18

Join Ms. Ellen at the park to listen to great stories and develop early literacy skills during summer storytime Wednesday, June 22, 10:00 to 10:45 a.m. at Memorial Park in Howard Lake. For ages 6 and under. Sponsored by Howard Lake – Waverly – Winsted Early Childhood Family Education.

Come READ with Penny the dog at the library Saturday, June 18, from10:30 a.m. to noon. Penny will be eager to hear you read! Children can build their reading confidence or just have fun reading to Penny. For ages 2 to 12. Sponsored by the Howard Lake Friends of the Library.

Support our veterans with all you can eat breakfast Friday and Saturday, June 17 and 18 from 8 a.m. to noon, located at the Legion post downtown Winsted overlooking our beautiful lake.
There will be omelets, scrambled eggs, blueberry and regular pancakes, hashbrowns, sausage, coffee, juice and milk. Price will be $15 per person.

No comments Posted in Happenings, Winsted 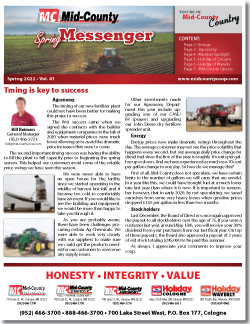 Mid-County puts a significant amount of time, effort and expense into created a bi-annual newsletter for its members and the public to see what has been going on at Mid-County over the last 6 month period. Transparency like this is exactly why an organization like Mid-County continues to thrive.

Want to read the Spring Messenger from Mid-County Coop?

Visit midcountycoop.com/messenger to read the latest edition and while your there check out all the past Messengers going back to 2006.

Area Memorial Day programs are set for the morning of Monday, May 30, providing a variety of options for remembering fallen soldiers.
Following is a summary of events planned in local cities:

Watertown
The Watertown American Legion Post 121 will have a Memorial Day Service at 10 a.m. Monday, May 30.
It will take place at the Watertown Mayer High School Performing Arts Center.
There will be student speakers, and the high school chorus will perform — refreshments and fellowship following the service.

Waverly
The Charles Claessens American Legion Post 305 and Auxiliary Unit will observe Memorial Day with services at 10:30 a.m. at Railroad Park in Waverly. All veterans are welcome to march in the parade, which will assemble in front of the Waverly Village Hall at 10 a.m.
As a special part of this year’s service, the new Veterans Memorial Wall will be dedicated during the ceremony. Post Commander Ken Borrell said, “This Memorial Wall, which includes the engraved names of over 500 deceased Veterans from the Waverly area, is a tribute to the many in our small community who have served our country from the Civil War; to the Present.”
• The keynote speaker will be Commander Michael Monahan, Ret. Navy.
• The Howard Lake-Waverly-Winsted High School band will play patriotic musical selections under the direction of Stephanie Dailey.
• “Flanders Field” will be recited by Kyra Czanstkowski, Waverly Ambassador.
• “We Shall Keep the Faith” will be delivered in response by Erika Pawelk, Waverly Ambassador.