Maynard Dean Forsberg, age 85, passed away peacefully under hospice care, at the Buffalo Glenn Memory Care facility Sept. 3, 2020. A celebration of life gathering will take place at Highland Community Church (13800 US Hwy. 12 SW) in Cokato, Thursday, Sept. 24 at 11 a.m. Interment will take place at Stockholm Lutheran Cemetery following the lunch.  In lieu of flowers, memorials may be made to the charity of your choice in Maynard’s honor. Swanson-Peterson Funeral Home in Cokato is serving the family.

N O T I C E   O F   P U B L I C   H E A R I N G
NOTICE IS HEREBY GIVEN, that on Thursday,   September 17,  2020  at 1:00 p.m.  the Wright County Planning Commission will hold a hearing in the County Commissioner’s Board Room at the Wright County Government Center, in the City of Buffalo, Minnesota to consider the following item:
KYLE E. ASHWILL
LOCATION: 13140 County Road 35 W– Part of E ½ of SE ¼, Section 35, Township 120, Range 28, Wright County, Minnesota.  (French Lake Twp.) Tax #209-000-354101
Petitions for a Conditional Use Permit for a commercial outdoor recreation to operate 5 training sessions (5 days per session)  per season for the public at the existing personal motocross track as regulated in Section 155.003(119), 155.029& 155.048 of Chapter 155 Title XV, Land Usage & Zoning of the Wright County Code of Ordinances.
In response to COVID-19, and pursuant to Minnesota Statute Chapter 12 relating to Emergency Management, Governor Walz has declared a state of emergency.  In response to the state of emergency and in accordance with Minnesota Statute Chapter 13D.021, Planning Commission members and the applicant may participate in person, by telephone, or other electronic means.  The meeting will be held at the Wright County Board Room located at 10 2nd St. NW, Buffalo, MN  55313.  In person public attendance and comments will not be allowed, to conform with MDH and CDC guidelines to minimize gatherings.  The meeting will be broadcast live on the Wright County YouTube channel.  Please visit the Wright County Planning Commission website at http://www.co.wright.mn.us/333Planning-Commission the week of the meeting for the link to the video and further instructions on how to participate. You may submit written testimony by emailing Sean Riley at sean.riley@co.wright.mn.us by 4:30 pm, Wednesday, September 16th.  Written testimony may also be provided and mailed to:  Wright County Planning and Zoning, 10 2nd St. NW, Room 140, Buffalo, MN  55313-1185.
WRIGHT COUNTY PLANNING & ZONING OFFICE
WRIGHT COUNTY GOVERNMENT CENTER
10 – 2nd STREET NW  RM 140
BUFFALO MINNESOTA  55313-1185
PHONE:  (763) 682‑7338
This meeting is subject to change. Please visit the Wright County Planning Commission webpage or sign up for automatic updates for this meeting at http://www.co.wright.mn.us/list.aspx
Published in the Herald Journal, Sept. 4, 2020.

WRIGHT COUNTY – The Tuesday, Nov. 3 general election is a little more than two months away, and many Minnesotans are looking at the options for voting – from showing up at the polls on Election Day as has been the common practice of voters for centuries, to voting early as an absentee voter to voting by mail.

In the state’s primary election earlier this month, Minnesota shattered records for absentee and mail-in voting and the expectation is that, in November’s general election, there will be another record-breaking number of voters using the absentee voting and mail-in options.

Wright County elections officials want residents to be aware of several resources that help explain the process of voting by mail, absentee voting and the procedures used to submit your early voting ballot.

Here are some links that can assist voters in that process:

Kare 11: How to vote by mail in Minnesota https://www.youtube.com/watch?v=yvMHJCm1DbU 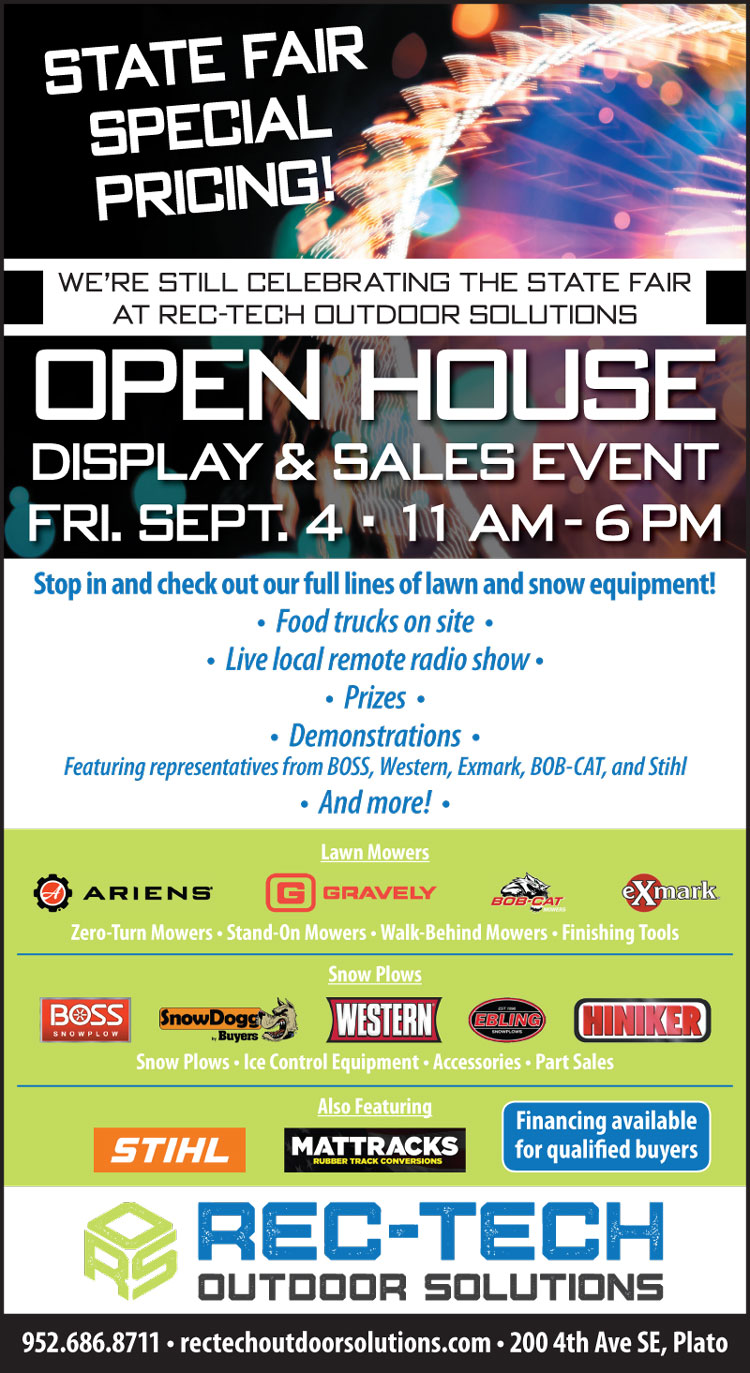 Stop in and check out our full lines of lawn and snow equipment!

Kihega was transported to the St. Cloud hospital by Allina Ambulance for non-life threatening injuries.

Deputies were assisted at the scene by Delano Fire and Rescue.

No comments Posted in Cokato, General

Joel Gordon Koivisto, age 66, passed away at home, surrounded by his family,  Aug. 23, 2020, after a long battle with Parkinsons Disease. A Funeral service will take place Thursday, Aug. 27, at 11 a.m. at the First Apostolic Lutheran Church in Dassel. Interment will follow at Cokato Finnish Cemetery. Visitation will take place 4 to  8 p.m., Wednesday, Aug. 26, at the church and one hour prior to the service. Arrangements by Swanson-Peterson Funeral Home and Cremation Service, 320-286-2534.