DELANO — “He’s been a rock for us all year. He has held us in so many games, and tonight was no different.”

These were the words spoken by Delano senior Michael Weber Feb. 26 following the Tigers’ 3-2 double-overtime win over Armstrong/Cooper in the Section 2A championship game when he was asked about goaltender Cade Lommel. 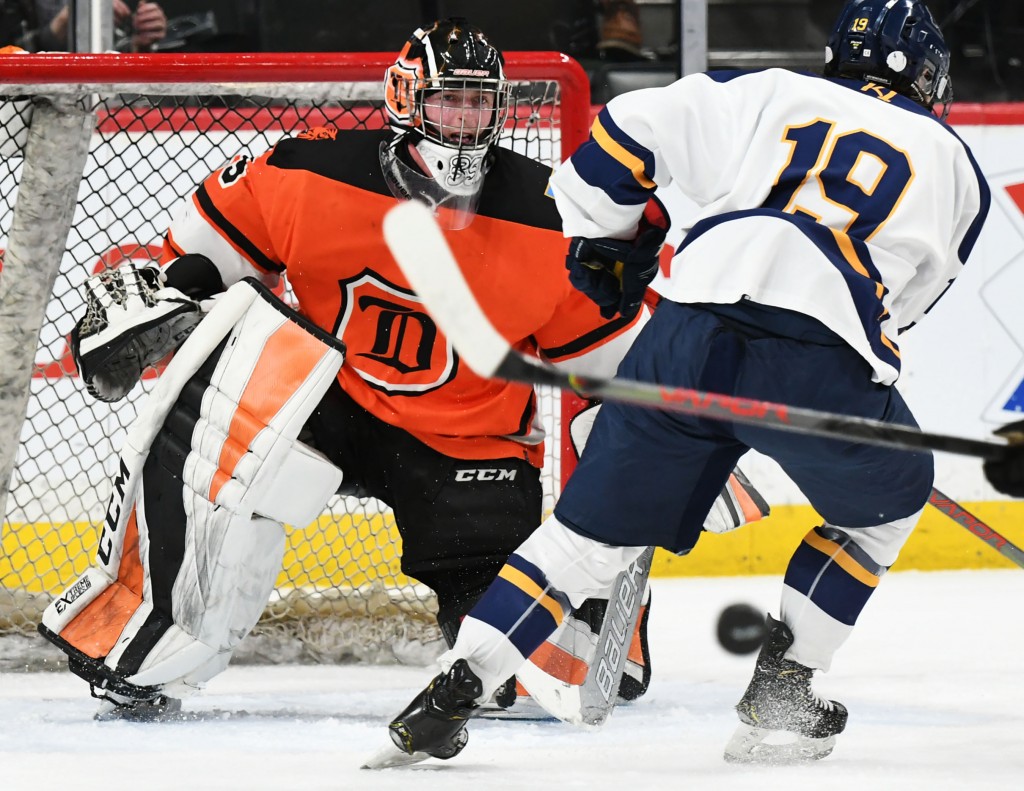 Lommel made 39 saves in the win, which put Delano in the state tournament for the third time in four season.

He is the third goalie to take the Tigers to state, following in line behind Jackson Hjelle (2017) and Aaron Kruse (2019).

“It’s an amazing group of goalies to play after. I am good friends with Jackson (Hjelle) and Aaron (Kruse),” Lommel said. “I saw Aaron after the game, and that was a special moment. He is a really good friend of mine.”

That deep friendship between Lommel and Kruse developed as the two battled for the starting spot a season ago.

Kruse was not the clear starter entering the 2018-19 season. Lommel started or played in seven of the Tigers’ first 12 games before Kruse took the spot, and carried Delano to  the state tournament.

Kruse finished with a 15-7-1 record and will be remembered in the annals of Delano hockey for his three shutouts in the Section 2A playoffs.

Lommel played in just three of Delano’s 19 remaining games, and finished with a 4-3-1 record.

Instead of sulking over his lack of playing time, Lommel became Kruse’s biggest fan.

“Last year, we had the opportunity to celebrate the teammate that Cade was in his support of Aaron, and we believe that helped Aaron play well once it was Aaron’s job,” said Delano coach Gerrit van Bergen after the win over Armstrong/Cooper. “Cade knew that, in a lot of ways, he was playing for Aaron tonight. And Aaron was here tonight, which is really special for the team and for Cade.”

Kruse couldn’t have asked for a better backup.

“Cade is probably the best teammate I’ve ever had. We both have a lot of respect for each other and nothing changed between us once I grabbed the starting job,” Kruse said. “He continued to support me in every way possible. He was always excited to see me or anyone on the team do well. He brought a positive attitude to the rink and worked hard every day, no matter the circumstance. I was extremely lucky to have him as my goalie partner.”

Lommel watched, learned, and supported his friend, as Kruse led the Tigers to the state tournament.

“He is great friends with Aaron, and Aaron taught him so much,” said van Bergen. “He admired Aaron and looked up to him, and he brought that into his game this year.”

At this year’s section final, the understudy was the star of the show.

As for standing tall in a tight section championship game, the humble Lommel wasn’t fast to put his performance at the level of Kruse’s 30-save performance a season ago in a 2-0 win over Orono.

“He had a shutout and I let up two goals, so I don’t know,” said Lommel, who will pitch at Creighton following his graduation this spring.

Kruse was impressed with Lommel’s performance.

“Cade played amazingly in the section final,” Kruse said. “He looked in control the entire game. The whole game he looked calm, and, in overtime when most people would tighten up, he kept his composure and stayed focused.”

Lommel’s current teammates know what he did for them against Armstrong/Cooper.

Lommel did see the Xcel Energy Center ice a season ago. He finished up the final few seconds for Kruse in a 6-4 loss to Greenway in the quarterfinals.