All the trappings of an enjoyable afternoon

So the other day a photo of Mike and Christie Halonen popped up on my Facebook feed. In it they were smiling, holding a beaver they had harvested from a trap.

The first thing that popped into my mind was, it looks like they’re really having fun.

The second thing was, ooh, perfect story for the sports section during the Coronavirus quarantine. I’d been looking for outdoors ideas, since, you know, that’s pretty much all any of us are allowed to do these days.

So I messaged Mike, whom I’ve known for over 30 years, to see if I could tag along with him on a trap line run.

Sure, said Mike. Meet us in Bertha on Wednesday afternoon.

That was the first inclination I had no idea I was getting myself into.

I don’t mean that in any kind of ominous or foreboding manner.

I just mean, I literally had no idea what I was getting myself into.

I knew Mike had been more heavily into trapping in recent years, but in my head I envisioned hiking along the Crow River or checking some local ponds, or something.

For those of you unaware of Minnesota geography, the tiny town of Bertha, just south of Wadena, is about two hours away from DC.

Anyway, doesn’t matter, challenge accepted, and off I went to Bertha (along with my son Isaac, who jumped at the chance to escape isolation for a little outdoors adventure).

I should preface all this by saying I’m not an outdoors neophyte. I go deer hunting most years, and do a little fishing and camping here and there.

You could even say I’m a veteran trapper, as I used to help my uncle Tim trap gophers over 25 years ago.

I wouldn’t say that, but you could.

Isaac and I met up with Mike and Christie at the Bertha-Hewitt High School and hopped into their truck, thus beginning one of the more enjoyable afternoons in recent memory.

The first of my preconceived beaver trapping notions they dispelled was my geographical expectation.

To be sure, there are beavers in the DC area. In fact, a couple years ago the pair trapped their way up the Crow River as far as Paynesville, harvesting 56 beavers along the way.

Mike especially has had the trapping bug for quite a few years, but it is only in the past couple seasons that the couple has been able to really spread their wings (or traps, as it were) and broaden their horizons.

This season, Mike and Christie have spent weeks  trapping lines on the Chippewa river in western Minnesota, along with the Wing River and Leaf River in the Wadena County area.

In fact, Mike was in the midst of a four-week sabbatical that he took solely to follow his trapping passion. Which, if you are setting and checking those traps from your home near Cokato, is a necessity, since beaver traps are legally supposed to be checked once every three days.

The second preconceived notion was dispelled when we got to our first set of traps west of Bertha, on the Wing River.

Instead of laboriously hiking river edges or tramping towards ponds, what Mike and Christie do is set a pair of traps near each bridge on the river where it makes sense to trap.

So instead of tramping, our afternoon consisted of winding our way along the back roads of Wadena County via pickup truck, stopping at each bridge where they had set traps.

“Beavers are heavy,” said Mike. “We let them come to us.”

A spot is picked out along the bank of the river, in a place that looks like it might be well trafficked (good signs are the tell-tale v-shaped markings of felled trees nearby, peeled sticks, and small mud piles on the bank in which beavers territorially mark their scent).

A stick of young poppel is stuck into the bank, with shavings carved off (beavers love the bark of young poppel). Mike also places a proprietary bait blend on the poppel.

A snap-trap is placed underwater, just in front of the poppel stick.

The trap is attached to a cinder block by a cable with a one-way sliding cam lock. The cinder block is then thrown some 10 feet away into the center of the river.

Essentially, when the beaver moves in for their snack of poppel, the trap is sprung. Once snared, the beaver can then move only one way, toward the cinder block in the middle of the river, where they drown.

Our first trap check resulted in a “double” with two beavers harvested from the traps. Not a bad way to start the afternoon’s trap line.

An Important Part of Ecological Management

The opening double was a good start, but ended up being one of just a few as we wound through the trap checks.

We checked 19 different locations (38 traps), and ended the trap line run with 14 beavers – about average for this season, said Mike.

As we drove along from trap to trap, bridge to bridge, I asked Mike about why he does it, and what type of impact trapping has on the environment.

As for the first question, Mike explained that about 10 years ago, when he first built his house on the Crow River north of Cokato, his buddy John Russell (the legendary JR) asked him if he could trap raccoons on his property.

Mike said he could, and that experience with JR set him on his own trapping path.

He started with coons, but branched out over the years to include coyote, muskrat, fox, fisher, marten, and beaver.

As for the second question, Mike said that just like hunting, trapping done right is an essential part of ecological management.

Beaver, for example, have almost no natural predators, and unchecked will choke out environs. He noted that the DNR will frequently contract trappers to weed out concentrated areas.

“Just about every farmer I’ve ever come across while trapping beaver has been happy to have us there,” said Mike.

There is, however, an element of backlash against trappers from animal rights activists like PETA (People For the Ethical Treatment of Animals).

One of the first messages Mike sent me was a warning that, no matter what my portrayal, there was bound to be a backlash against anything I wrote, simply because of the polarized views of trapping.

However, as for the real-life animal-rights backlash on his trapping, it has been negligible thus far, he said. We did come across one trap that had obviously been set off by a stick, but judging by location it is more likely to have been set off by a bored teenager than a PETA agent.

Similarly, Mike said he’s had six of his traps stolen this year, but he attributes those thefts more to crimes of opportunity than eco-terrorism.

Christie will readily admit she is a bit of an anomaly in the trapping world.

Most women, she said, view trapping as something “icky” and “gross,” something only suited for men.

And indeed, in the early years, that was how she viewed trapping as well.

But as Mike became more and more involved, so did she.

At first, she helped him with skinning, stretching and drying pelts in their garage, then graduated to going along with him on trap runs.

“He would come home from work at 3, leave to go check his traps and not come home until 9,” she said. “Eventually I said, ‘I want to come, too.’”

What started as ridealongs evolved into Christie becoming an equal partner with her husband.

Indeed, Mike and Christie worked as a team in every trap check we did, with each one taking a trap and handling the results, be it harvesting, re-setting traps, or at one point, Christie helping Mike out of the river.

The couple really seemed to enjoy each other’s company, trading quips and barbs as we drove around (Christie acts as the navigator and information director with a touch-screen tablet map, while Mike drives). Both of them talked reverently about being in nature to witness sunrises and sunsets together.

“I would encourage any woman to join their spouse in an outdoor activity,” said Christie. “It’s a great chance to spend some quality time together.”

Mike said one of the reasons he agreed to have me and Isaac tag along on their trap run is to bring awareness to the trapping industry.

Simply put, he said, the industry is dying.

“If you go to a trapping convention these days, it’s almost all older guys. Very few younger men, kids, or women,” he said. “And that’s a shame, because not only is it an important part [of ecological management], but it’s a lot of fun.”

After spending an afternoon on a trap line with Mike and Christie, I can confirm, it is a lot of fun. Like hunting or fishing, there is a rush of satisfaction in seeing your preparation end up in results.

I can see why they both were smiling in their Facebook photo.

Some interesting facts I learned about beaver trapping, and Mike and Christie Halonen’s operation:

• Each and every person involved in trapping must have a Trappers’ License from the State of Minnesota. While I was fine taking pictures, Mike instructed me not to help him in any way, shape, or form with his trapping operation (not that I was really planning to, anyway).

• There are around 5,000 trapping licenses granted each year in Minnesota. Of those, Mike estimated that only around 100-200 or so trap at a similar rate as he and Christie for any species, with even fewer going hard after beaver.

• Mike and Christie bring their harvested beavers to a buyer in Park Rapids. The buyer in turn sells the beaver’s castor, meat, pelt, skull and tail to third party buyers.

• Beaver castor, or castoreum, is collected from beaver glands. It is used as a flavoring agent in food and drink, and is also used for anxiety, restless sleep, and as a calming agent. Women have traditionally used it to treat painful menstrual periods. In the current market, castor gland is the most valuable part of the beaver, at about $80/pound.

• Beaver meat, especially the tail, is fit for human consumption. A lot of beaver meat also goes to top-end dog sled teams for their rich nutrients and fat.

• About 4-5 years ago, the beaver pelt was worth 4x what it is now. At that time, most of the pelts were purchased by Russia for clothing use. However, US sanctions, combined with an oil price drop and the dollar’s strength over the ruble, has reduced the strength of the market. The main use for the beaver’s fur these days is in fur felt hats.

• Mike is among one of the instructors in “Trappers Field Day,” held every fall in Kimball. Children and adults of all ages are encouraged to attend and learn more about trapping. 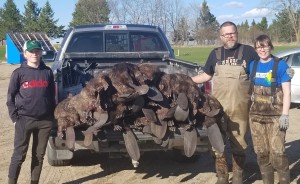 Isaac Salmen, Mike Halonen, and Christie Halonen pose after a successful trapline check on the Wing and Leaf Rivers Wednesday, April 29. All told, there are 28 beavers on this tailgate, 14 of which came on our run.

No comments Posted in ED Sports