A life-changing victory: Koivisto wins Northern Ireland Open to move into top-500 in the world 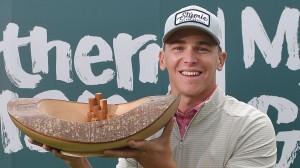 The term “long shot” underestimates the odds for the 2011 DC graduate – at least, for those who don’t know him.

After the Northern Ireland Open, however, the golf world now knows his name.

Koivisto seized his opportunity in a big way to win the Northern Ireland Open in true underdog fashion, shooting a 13-under 267, two strokes ahead of closest challenger Kristian Krogh Johannessen of Norway.

• By winning the tournament, Koivisto is now ranked #495 in the entire world, ahead of such notables as Ernie Els (#514).

“It’s been a crazy week. I’m just trying to process everything,” said Koivisto. “I’m a long way from the Cokato Town & Country Club.”

Koivisto had a stellar amateur career, starting at Dassel-Cokato High School. He took fourth in the state tournament as a senior at DC, and won sixtournaments at St. Cloud State, including an individual conference title.

But after graduating, Koivisto put any dreams of a golf career on hold for three years, instead becoming a teacher at Pinewood Elementary in Monticello.

However, in the summer of 2018, Koivisto was given a good opportunity to play full time, and quit his teaching job to focus solely on golf. With his wife Jane (Pietila), the two moved to Arizona, where he embarked on a wide range of Mini Tours, State Opens, and Monday PGA Qualifiers.

Over the past two years, the two have worked in tandem. Jane, a Registered Nurse, worked when necessary, and other times accompanied Tyler to his tournaments to caddy for him.

The Koivistos have worked together on the Dakota Tour, the Outlaw Tour in the Southwest, the Golden State Tour in California, and numerous other mini tours and state opens.

Tyler said he would not have been able to pursue his dream without Jane by his side.

“She’s been unbelievable since Day one, when I was still teaching and I got this inkling of an opportunity to play full time and give it a shot,” he said. “She was on board right away. She always believed in me, I think even before I believed in myself. It’s been amazing, how supportive she’s been.”

In pursuit of his pro golf career, last year the Koivistos ponied up the money for Tyler to attend the European “Q School” in Austria.

“Q School” for the European Tour is similar to the “Q School” for the PGA Tour in the United States. The top golfers are granted membership to the top league (European Tour, PGA Tour), with the next-best golfers making the second tier league (Challenge Tour in Europe, Korn Ferry in the USA).

The European Q School has three stages. The top-25 golfers make the European Tour, the next 25 get full cards for the European Challenge Tour, and the next cut get “conditional status.”

Koivisto played well enough to make the first Q School cut, and get conditional status. This gave him “A1” membership to the Challenge Tour, meaning he would be first in line to be called to play if there were late cancellations at a Challenge Tour event, whether it was a player getting called up to the European Tour, an injury withdrawal, or a sponsor invite.

“It was the bare minimum, the least amount of status [on the Challenge Tour],” said Koivisto.

And thus it was nothing more than kismet that Koivisto received a phone call on Friday, Sept. 4, letting him know there he was second on the reserve list at the Northern Ireland Open, and would he be available?

The next day, the opening was confirmed, and Koivisto booked the next available flight for Dublin, Ireland.

“I told them, yes, I’m going to take any opportunity I can get,” he said.

He arrived in time to unpack and put in a couple practice rounds on Tuesday and Wednesday, before the tournament began on Thursday.

Koivisto did not know it at the time, but the Northern Ireland Open is usually the marquee event in the Challenge Tour. In years past, golf fans from throughout Northern Ireland have packed the grandstands.

This year, with all the Covid restrictions, there were no fans. In fact, there were not only no fans, but no caddies, and Jane had to stay at home. Only event workers and media were allowed. Golfers were in a “bubble”, only allowed to travel from their hotel to the course at Galgorm Castle, near Ballymena, Northern Ireland.

Koivisto said the restrictions may have helped his overall performance. With less outside distractions, he was able to concentrate on his game.

“With everyone carrying their own bag, it was kind of like old times, grinding away solo,” he said.

He started the tournament with a three-under 67 Thursday, one stroke off the lead.

He then shot a one-over 71 Friday, and fell four strokes off the pace.

Then came Saturday. Koivisto had a round for the ages, shooting an 8-under 62, putting him in the lead by three strokes.

“Saturday, I hit the ball a little better, and got the putter rolling,” he said. “I really was focused on each shot, not getting caught up on results, and what it might mean. If you start thinking like that, you’re in trouble.”

Andrew Wilson (England) and Johannessen each came within a stroke of Koivisto as he played the back nine, but after a bogey on 14, Koivisto birdied 15 to take control.

Koivisto made the green in two on the par-5 18th, knowing he needed three putts or less to win.

He put his first putt within two feet of the hole, and tapped in for birdie, and a two-stroke victory.

“It was pretty cool coming up 18. Even though there were no fans, there were cameras, and the volunteers, staff, everyone was out there to watch the final hole,” he said. “To see your name on top of the leaderboard, and hit the green in two on a par-5, knowing you had four putts to work with … once I nuzzled it up close, it was more relief than anything.

“I was done with a long week, and then at that point I was able to think about the results,” he said.

Koivisto said the moment didn’t fully hit him until after he had hoisted the trophy, and talked to the media.

“I got done with all the press stuff and interviews, and got back to the clubhouse and turned my phone on. I had 105 messages. I started bawling,” he said. “It was so encouraging to see all the support, from people who care about you and what you are doing.

“It was really special for me,” he said. “It was a dream week of golf. Hopefully, it was just a start.”

There can be no other way to put it. The Northern Ireland Open was lifechanging for Koivisto.

And it was, indeed, the startof a new path.

As mentioned, Koivisto has a full card for the Challenge Tour through 2021. With that, he will also get a few chances on the European Tour.

The first opportunity for both comes next weekend, in the Open de Portugal at Royal Obidos. The tournament will be co-sponsored by the European Tour, and the Challenge Tour.

Koivisto said his wife Jane will be allowed to attend and caddy for him, pending a Covid test.

“I’m really looking forward to seeing her, and sharing this with her,” he said.

Beyond that, his future is in his hands.

There are a few Challenge Tour events remaining in 2020, with most likely 20-30 tournaments in 2021, depending on scheduling (and Covid restrictions).

Koivisto said he plans to play as many of those events that make sense to hopefully keep his top-20 spot – which will give him a card on the European Tour.

As for his winnings from the Northern Ireland Open, Koivisto said the prestige and confidence from winning such a big tournament means much more to his career.

“It’s a tough grind. There are a lot of expenses in chasing professional golf to its highest levels,” he said. “The money [won] helps, and we’ll use it to pay some bills, but ultimately it’s knowing you can win big events at the big stages that is the biggest motivator.

No comments Posted in ED Sports